Especially when they're dentists. 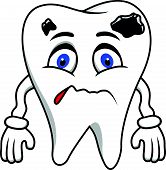 Bubb and I were with the fam for vacation down at Myrtle Beach three weeks ago when he started to get a toothache.  After 2 days in pain, we went to a Dentist who said there was an infection in the root, and then patched it up as best as possible so he could get home.  We landed on a Saturday and had planned to go to the Dentist on Monday, but Bubb was in such pain that we went straight from the airport to the first Dentist we could find.

We went to the Dentist, and they identified a root canal *ugh*.  So they did the root canal and put on a temporary.  We then had to wait a week for the perm crown.  A week.  When I had mine done it took two days.  Red flags were going up.  Bubb goes back and gets the perm crown.  Cut to almost a week later, Bubb is still in pain and slowly going insane from the pain and annoyance.

So now we are off to an Endodontist tomorrow to potentially have the crown removed, root canal possibly re-cleaned, and a new crown done.  Needless to say, Bubb is fit to be tied.  And I am running a close second behind him.

The annoying part, they make you sign all sorts of forms when you go to a dentist that you basically have no recourse if they screw up.  Which drives me insane.  And you're going to sign them because you're in pain and need to have your tooth fixed!!!  My husband has been in pain for a week and the quack who didn't fix it gets off fine.

Email ThisBlogThis!Share to TwitterShare to FacebookShare to Pinterest
Labels: Bubb

Oh, that's the worst. I think dentists still get into trouble for shoddy practice in the UK . I hope Bubb makes a swift recovery.... I see dental problems as an excuse for a drop of whiskey.
Sx

Thank you Ms Scarlet. We are getting him fixed tomorrow fingers crossed. Neither Bubb or I are whiskey drinkers sadly.

Did you know you can shorten your long urls with AdFly and get cash from every click on your shortened urls.