Bubb gave me the phrase "Apologist In Chief" this morning for Mike Trump.

Watching the Putz on CNN this morning it certainly seems accurate. 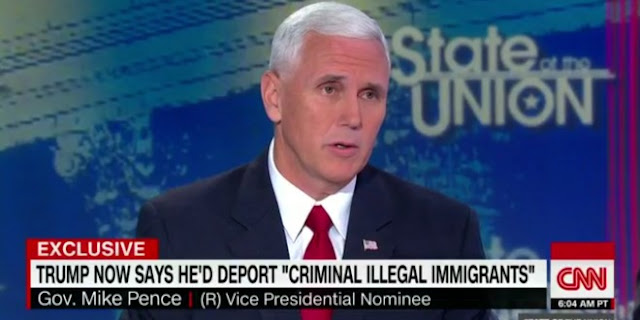 Republican vice presidential nominee Mike Pence insisted Sunday that Donald Trump has been “absolutely consistent” on how he’d treat undocumented immigrants as president and his recent comments on the topic have been that of “a CEO at work.”

But he wouldn’t directly address whether Trump would stick with his calls during the GOP primary campaign for a “deportation force” to deport those immigrants — or, as Trump has indicated in recent days, back away from that proposal — in an interview with CNN’s Jake Tapper on “State of the Union.”

“There will be no path to legalization, no path to citizenship. People who want to gain legal status — you heard Donald Trump say again and again — will have to leave this country,” Pence said.
Tapper pressed Pence several times on whether Trump specifically still wants a “deportation force” — which he’d called for nearly a year ago. It was part of Trump’s hard-line stance on his signature issue of immigration. He’s also insisted he’ll build a U.S.-Mexico border wall
Posted by Damien at 11:30:00 AM

Email ThisBlogThis!Share to TwitterShare to FacebookShare to Pinterest
Labels: Trump

I watched some Republican Trump crony on TV say that if Hillary won he was going to move to Costa Rica. I've been looking at real estate there just in case Trump won.