No Same Sex Marriage For Australia

Well well well.  The Wicked Witch of Down Under broke his promise.  Now he says no same sex marriage plebiscite until 2017.


The plebiscite to decide whether marriage equality should be legalised in Australia will be held in February 2017.  The Daily Telegraph reported late today that the issue would not be put to the Australian public until early next year. 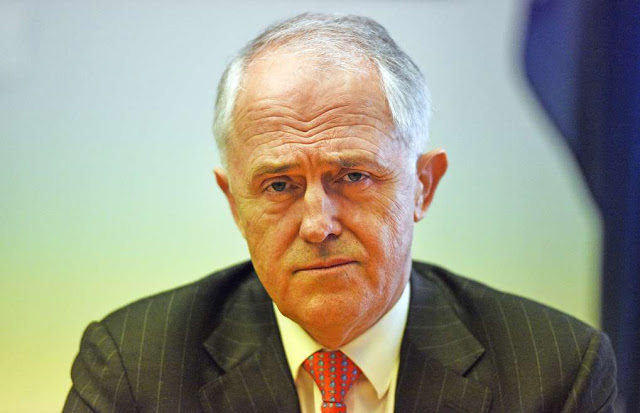 Australia's Horrid Prime Minister - Malcolm Turnbull @TurnbullMalcolm
Malcolm Turnbull, the prime minister, had pledged before the July election to hold the plebiscite before the end of the year.  The plebiscite will reportedly ask: “Do you approve of a law to permit people of the same sex to marry?”  The government had considered other options for the question, but those would be abandoned after testing poorly in focus groups funded by activists.
Voting would be compulsory with fines imposed for those who failed to do so.

The Daily Telegraph reported that the prime minister would announce the new timeline at a Coalition party room meeting on 13 September, during the second week of parliamentary sittings.
It also reported that Bill Shorten, the Labor leader, would launch a last-minute bid to overthrow the plebiscite in the coming weeks, introducing a private member’s bill to legalise marriage equality with a free vote of Parliament. 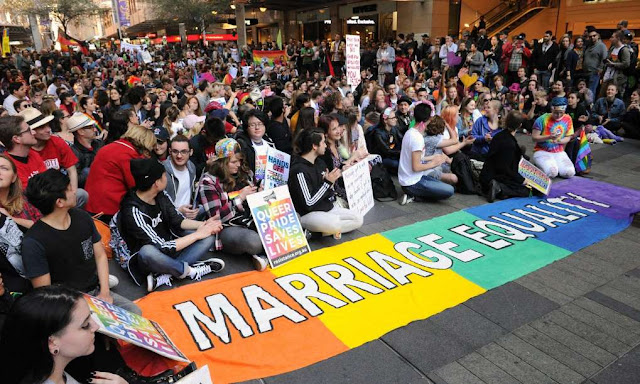 © AAP Image/Joel Carrett Supporters of marriage equality have been calling on members of federal parliament to pass legislation and avoid a same-sex marriage plebiscite.

Turnbull had been unequivocal about his desire to hold the plebiscite as soon as possible – ideally before the year was out – in the lead-up to the 2 July election.  But after he was elected as prime minister he appeared to shy from the commitment, indicating on 18 July that it may be delayed until 2017.

A spokesman for Turnbull could not be reached for immediate comment by Guardian Australia.

A plebiscite is a direct vote of all the members of the country on an important public policy issue, but is distinct from a referendum because the constitution does not need to be changed.
The plebiscite would be followed by a vote in parliament, and various government members have signalled that they would not be led by its result.

Some, including senators Eric Abetz and Cory Bernardi, have said they would abstain or vote against the legislation that would come before the parliament if the plebiscite was passed.

In July a poll found that only 48% of Australians backed a marriage equality plebiscite, casting doubt over the government’s claim the “overwhelming majority” of Australians were in favour of the idea.
The issue had caused rifts among marriage equality advocates, who were split over whether to launch a campaign to win over the public or push for a free vote in parliament.

Rodney Croome resigned as the national director of Australian Marriage Equality at the start of this month.  He was among many campaigners who feared that a plebiscite campaign could put vulnerable members of the gay, lesbian, bisexual, transgender and intersex community at risk.
“If there is a plebiscite, and when the first gay kid dies at his own hand because of the hate and fear-mongering, I have to be able to look at myself in the mirror and know I did everything I could to stop it … everything,” said Croome.
Posted by Damien at 5:07:00 PM

Thanks JP - its an article from an Australian news site. So depressing that we have such backward old white men who are not listening to the majority of our citizens.