My 23andme DNA Results Came Back!

AND I AM WHITER THAN WHITE CAN BE!!!

So basically I get most of my DNA from British and Irish with French & German, Scandinavian and a potpourri of Northwest Europe.

Whilst I kind of knew that I was broadly white, to find that a chunk comes from Norway, Finland, Sweden and Denmark is kind of exciting.  I have always wanted to visit these places and so clearly I must :) 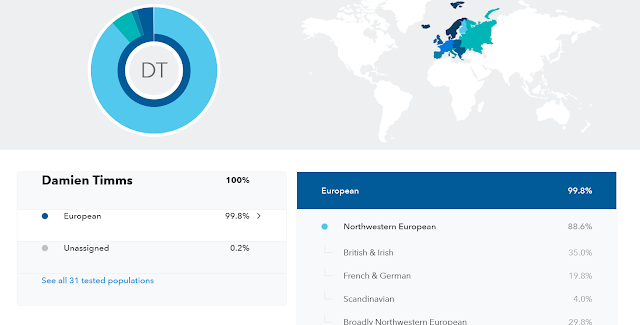 Given my mothers roots are in America and Canada, and my dad is in Britain and Scotland I am not surprised by the Gaelic/Anglo-Celtic chunk.  The French & German is a surprise to be honest.  I haven't heard anyone on either side of my family talk of En France or Eine Deutschland! 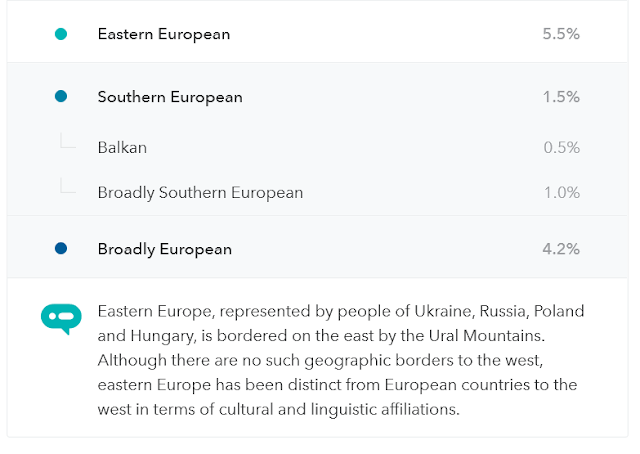 Now - the Eastern European part is one that requires further investigation I believe.  My late Aunt Valencia said that she was under the impression that her Grandmother - My Great Grandmother Rosa - was Jewish.  GGM Rosa migrated to Canada early in life, then to Australia later.  Where from?  We do not know.  But now I think we should.

I think once my immigration is sorted here and I am able to work, an investment in a genealogist will be in order.  I am thoroughly intrigued by how European I am and the breadth of my DNA.

I initially was not all that interested in the whole DNA journey thing I don't mind admitting.  But I am thoroughly intrigued now as my family on both sides seems to be a real patchwork.

Oh - I also have a significant amount of Neanderthal markers.  More so than normal.  That would DEFINITELY explain some things :)

Blessings for you all,

Email ThisBlogThis!Share to TwitterShare to FacebookShare to Pinterest
Labels: About Me, DNA

Cool post! Fascinating stuff, these roots of ours. Must say I do have the askenazi roots as all four grandparents came from Di alte heym (yeah, the old country...east Europe). ...but to make things interesting the came from both sides of the divide: litvak (Lithuanian) and Galitzianer (western Ukraine) ....and that probably explains me.! BTW, the Scandinavians really got around, settling in England (and mixing with the angles who had previously arrived from what is now northwest Germany, and also settling in France at the lower Loire valley, learning French to become the Normans (literally North Men) who in 1066 invaded England. I would say it all fits together quite well. Cool about the large chunk of Neanderthal...and good luck on tracking fm Rosa. Fascinating post!

Hey Luke glad you enjoyed. I am very intrigued by the results.
I am often living up to my Neanderthalic roots LOL.