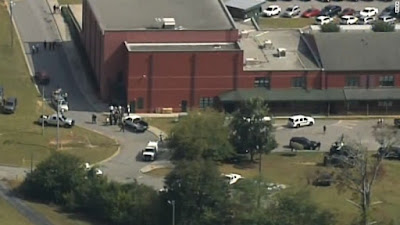 (CNN)Two children and a teacher were shot by a gunman at an elementary school in Townville, South Carolina, an official with Anderson County Emergency Services told reporters Wednesday afternoon.

The suspected shooter, a teenager, is in custody, deputy chief Taylor Jones said.

The teacher and one student taken to AnMed Health Center are in good condition, hospital spokesman Ross Norton told CNN.  The other child was taken to Greenville Health System emergency trauma center by helicopter, spokeswoman Sandy Dees said. That student's condition was not known.
The mother of a student at Townville Elementary School told CNN Greenville affiliate WYFF that her daughter and classmates huddled in a bathroom.
"Her teacher was shaken up. I know all the kids were scared. There was a bunch of kids crying," the unidentified woman said. "She didn't talk for about five minutes when I got her. ... I'm just so scared. I don't even want her to go to school now."  The mother said she was praying for the families of the injured.WYFF reported the shooting occurred just after 1 p.m. ET.
Townville is in the extreme western part of the state, southwest of Greenville. Anderson County has a population of about 194,692. The elementary school has about 280 students. About 30 school employees are listed on the school's website. School picture day is scheduled for Friday.
CNN's Keith Allen and Emanuella Grinberg contributed to this report.
Posted by Damien at 4:29:00 PM