Stoopid - Why Does America Give Horrid People A Pass?

I am astounded that currently, large swathes of people in this wonderful country seem to be quite willing to either give dreadful people a pass, or, simply ignore their indiscretions/crimes/deplorable behaviour.

Trump is the ultimate case in point.

But let's reacquaint ourselves with Josh Duggar via the fabulous Joe My God - link in sidebar.

According to a Facebook message posted this afternoon by the Duggar Family, Josh Duggar is once again living the traditional one-man one-woman marriage that God Intended™ now that White Jesus has forgiven him for all those non-Jesus-y transgressions that cost him his gig as a hate group leader and cost the family millions of dollars of reality show dough. Whether Josh can be redeemed for his new job as a used car salesman, however, seems highly unlikely. 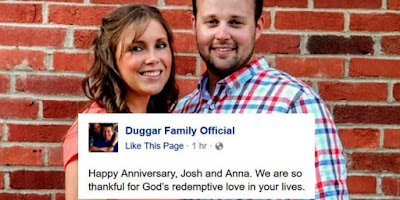 It would seem that Josh Duggar is finally living that clean, Jesus-y life that he was living before - if you forgive him those rape/child molestation/porn watching/wife cheating things that went on.  As his family clearly has.

AND he seems to be getting a pass.  This is Christianazi hypocrisy at its finest.  And wow does it piss me off.  Did he spend time in jail?  Is he paying reparations?  Is he getting ass-raped by a big white power dude call Earl in his jail cell?

He was sent to a Christian Facility where apparently he worked real hard with Jesus to work on both why he did what he did and forgiveness for what he did.  Somewhat coincidentally, the statute of limitations had run out by the time the media and a court had learned he was fond of touching his little sisters in their no-no places whilst they slept.

Now, he's having cute little photos being posted on Twitter by his twisted family who are just SO thankful for Jesus' redemptive love.

I'm off to vomit for an hour or so.

Ugh.  I can't with segments of this country right now.  Just can't.

My apologies to Arnold Palmer that this post sits above his RIP.

The level of obliviousness in this country is now a pandemic.  People should be forced to be informed of current events and those horrible events that are being swept under the carpet.