Please be upstanding.  A great man has left the Holy Land to dwell with HaShem in the world to come.

Former Israeli Prime Minister, President and Nobel laureate Shimon Peres is dead, according to Israel's Channel 2 and Channel 10. The 93-year-old Peres suffered a massive stroke two weeks ago. He was reported to be making progress but doctors said he took a turn for the worse Tuesday. Peres' family was believed to be at his bedside when he died at the Sheba Medical Center in Tel Aviv.


The health of former Israeli President and Prime Minister Shimon Peres has deteriorated, Israel's interior minister said Tuesday, two weeks after Peres suffered a stroke.
The visibly shaken minister, Aryeh Deri, told reporters at a Tel Aviv hospital that he had been praying for Peres at his bedside.
Peres, 93, has been at the hospital since his stroke September 13.
Doctors had signaled cautious optimism a day after Peres' hospitalization, saying that although he was intubated and sedated, he was able to shake his son-in-law's hand as his level of sedation was reduced. 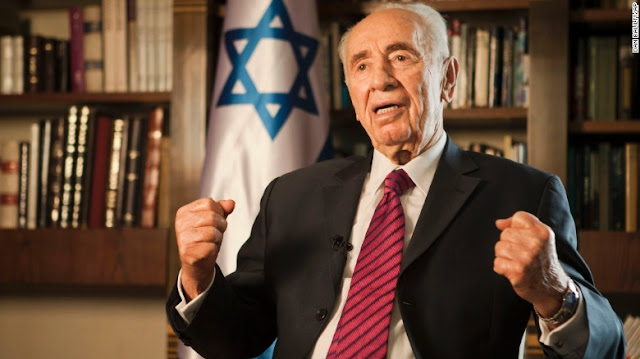 Email ThisBlogThis!Share to TwitterShare to FacebookShare to Pinterest
Labels: RIP